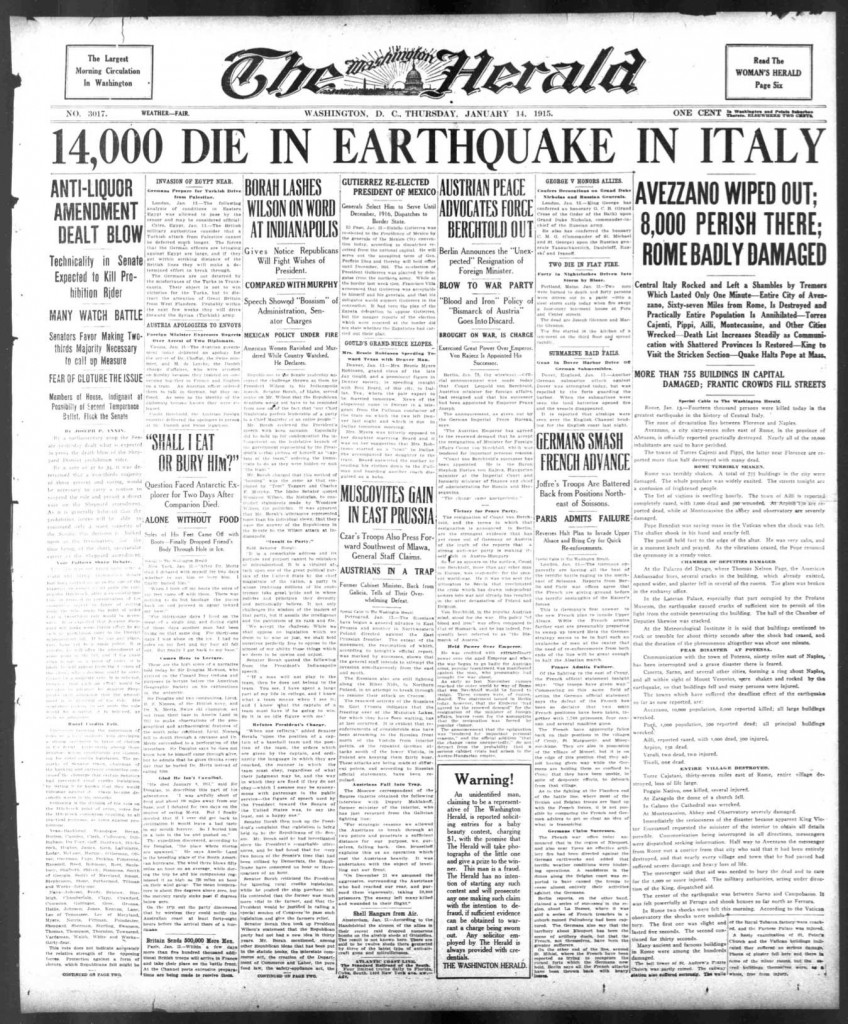 Central Italy Rocked and Left a Shambles by Tremors Which Lasted Only One Minute—Entire City of Avezzano, Sixty-seven Miles from Rome, Is Destroyed and Practically Entire Population Is Annihilated—Torres Cajenti, Pippi, AiIli, Montecassine, and Other Cities Wrecked—Death List Increases Steadily as Communication with Shattered Provinces Is Restored—King to Visit the Stricken Section—Quake Halts Pope at Mass.

Special Cable to The Washington Herald

Rome. Jan. 13.—Fourteen thousand persons were killed today in the greatest earthquake in the history of Central Italy.
The zone of devastation lies between Florence and Naples. Avezzano, a city sixty-seven miles east of Rome, in the province of Abruzzo, is officially reported practically destroyed_ Nearly all of the mow inhabitants are said to have perished_ The towns of Torres Cajenti and Pippi, the latter near Florence are re-ported more than half destroyed with many dead.
ROME TERRIBLY SHAKEN.
Rome was terribly shaken. A total of 755 buildings in the city were damaged. The whole populace was widely excited. The streets tonight arc a contusion of frightened people. The list of victims is swelling hourly. The tow-n of AIM is reportel completely razed, with r000 dead and 5oo setrunded. At-nrpirfol:n are re-ported dead, chile at Nlontecassine the abbey and observatory are severely i damaged. I Pope Benedict was Saying mass in the Vatican when the shock was felt. The chalice shook in his hand and nearly fell. The pontiff held fast to the edge of the altar. He Iva, vent calm, and in a moment knelt and prayed. As the vibrations ceased. the Pope resumed the ceremony in a steady voice. (-HAMMER or rwrtiTtr..” DVIIAGED. At the Palazzo del Drago, where Thomas Nelson Page, the American Ambassador lives, several cracks in the building, which already existed, opened wider, and plaster fell in several of the rooms. Tare glass was broken in the embassy office. In the Lateran Palace, especially that part occupied by the Profane Museum, the earthquake caused cracks of sufficient size to permit of the light frown the outside penetrating the building. The hall of the Chamber of Deputies likewise was cracked. At the Meteorological Institute it is said that building.i continued to rock or tremble for about thirty seconds after the shock bad ceased, and that the duration of the phenomenon altogether was about one minute. FEAR DISASTER AT POTWISA. Communication with the town of Potensa, ninety miles east of Nopfes, has been interrupted and a grave disaster there is feared. Caserta, Sarno. and several other cities, forming a ring about Naples. and all within sight of Mount Vesuvius, were shaken and rocked by the earthquake, so that buildings fell and many persons were injured. The towns which have suffered the deadliest effect of the earthquake so far as now reported, arc: Asczrano, tomoo population. 8,000 reported killed; all large buildings wrecked. Posfki. %cam population. 5o0 reported dead: all principal buildings wrecked. Ailli, reported razed, with i.000 dead, soo injured. Arpino, t5o dead_ Veroll, two dead. two injured. Tivoli, one dead. ENTIRS vILLAtir. DEsTitol-Fm. Torre Cajatani, thirty-seven miles east of Rome. entire village de-stroyed, loss of life large. Poggio Nativo, one killed. several injured. At Zaragolo the dome of a church fell. In t;alano the Cathedral was wrecked. At Montecassino. Abbey anti Observatory %evercl• damaged. Immediately the seriorpmeg ,,F the disaster became apparent King Vic- tor Emmanuel requested the tssissi•ter of the interior to obtain all details Possible. Commitrication being interrupted in all directions, messenger, %fire dispatched seeking information. Half way to Avezzano the messenger front Rome net a courier from that city who said that it had been entirety destroyed. and that nearly es cry s illage and town that he had passed had suffered severe damage and hea%y loss of life. The messenger said that aid was needed to bury the dead and to care for the 1,000 or more injured. The military authorities, acting under direc-tion of the King. dispatched aid. The center of the evtliquake was between Sarno and Campobasso. it was felt powerfully at Perugu and shook houses so far north 25 Ferrara. in Rome two shocks were felt this morning. According to the Vataa ic observatory the shock 4.— _ s v.ere undula—-
tory. The first one yeas slight and lasted five seconds. The second con-tinued for thirty seconds. Many ancient and famous buildings in Rome were among the hundreds damaged. Th. ht.!’ tower of St. Andrrw’s IIIP7-atta Thurrit was partly ruined The raltwaT station a sos-affered seriousitY. The val:a
of the flo■•al Tobacco factory were track-ed. and Farnese Palace was iniur.d. A haist• euanitnatitin of St. Peter,. Church and the Vatican buttilinga Indj. elated they suffered no serious damask Pieces of plaster fell here and there is acme of the minor roomy. but the 811. red bniktings thernothrea were. GO al whtste, free from Injury. 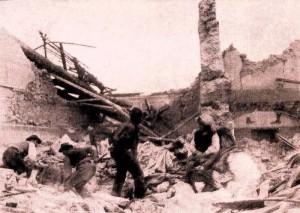