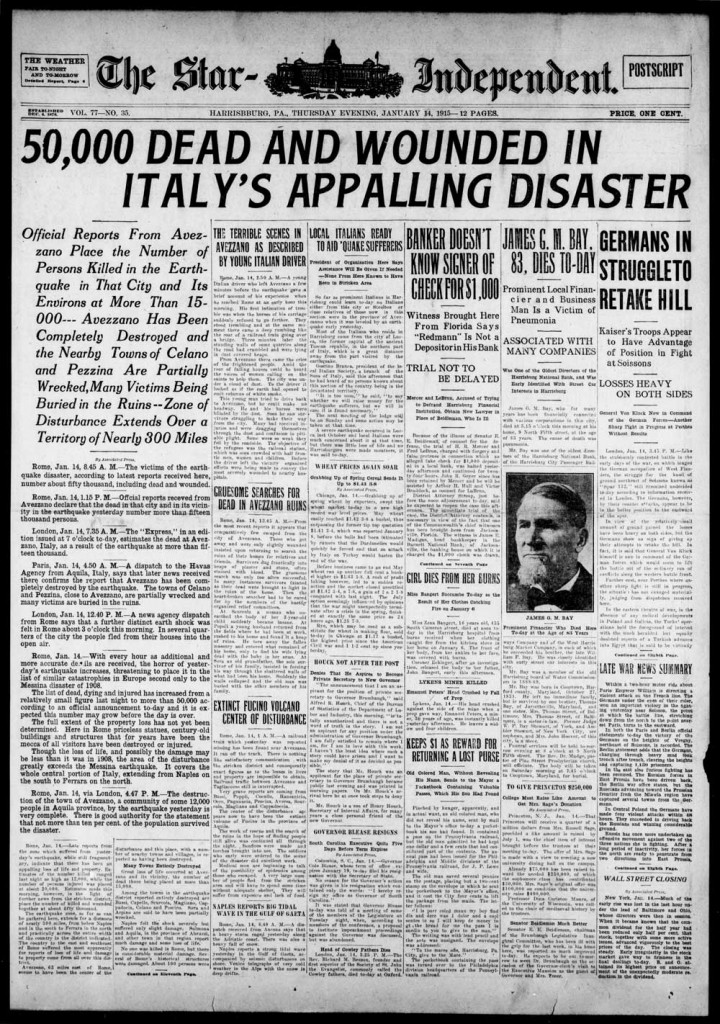 Official Reports From Avezzano Place the Number of Persons Killed in the Earthquake in That City and Its Environs at More Than 15.000— Avezzano Has Been Completely Destroyed and the Nearby Towns of Celano and Pescina Are Partially Wrecked,Many Victims Being Buried in the Ruins—Zone of Disturbance Extends Over a Territory of Nearly 300 Miles

Rome, Jan. 14, 8.45 A. M.—The victims of the earthquake disaster, according to latest reports received here, number about fifty thousand, including dead and wounded.

Rome, Jan. 14,1.15 P. M.—Offcial reports receved from Avezzano declare that the dead in that city and in its vicinity in the earthquake yesterday number more than fifteen thousand persons.

London, Jan. 14, 7.35 A. M.—The “Express,” in an edition issued at 7 o’clock to-day, estimates the dead at Avezzano, Italy, as a result of the earthquake at more than fifteen thousand.

Paris, Jan. 14, 4.50 A. M.—A dispatch to the Havas Agency from Aquila, Italy, says that later news received there confirms the report that Avezzano has been completely destroyed by the earthquake. The towns of Celano and Pescina, close to Avezzano, are partially wrecked and many victims are buried in the ruins.

London, Jan. 14, 12.40 P. M.—A news agency dispatch from Rome says that a further distinct earth shock was felt in Rome about 3 o’clock this morning. In several quarters of the city the people fled from their houses into the open air.

Rome, Jan. 14.—With every hour as additional and more accurate details are received, the horror of yesterday’s earthquake increases, threatening to place it in the list of similar catastrophes in Europe second only to the Messina disaster of 1908.

The list of dead, dying and injured has increased from a relatively small figure last night to more than 50,000 according to an official announcement today and it is expected this number may grow before the day is over.

The full extent of the property loss has not yet been determined. Here in Rome priceless statues, century-old buildings and structures that for years have been the mecca of all visitors have been destroyed or injured.

Though the loss of life, and possibly the damage may be less than it was in 1908, the area of the disturbance greatly exceeds the Messina earthquake. It covers the whole central portion of Italy, extending from Naples on the south to Ferrara on the north.

Rome, Jan. 14, via London, 4.47 P. M.—The destruction of the town of Avezzano, a community of some 12,000 people in Aquila province, by the earthquake yesterday is very complete. There is good authority for the statement that not more than ten per cent, of the population survived the disaster.

Rome, Jan. 14.—Late reports from the zone which suffered from yesterday’s earthquake, while still fragmentary, indicate that there has been an appalling loss of life and property. Estimates of the number killed ranged last night as high as 12,000, while the number of persons injured was placed at about 20,000. Estimates made this morning, however, in the light of further news from the stricken district, place the number of killed and wounded together at about fifty thousand.

The earthquake zone, so far as can be gathered here, extends for a distance of nearly 300 miles, from below Naples and in the south to Ferrara in the north and practically across the entire width of the country in the district indicated. The country to the east and southeast of Rome suffered the most apparently for reports of loss of life and damage to property come from all over this district. Avezzano, 63 miles east of Rome, seems to have been the center of the disturbance and this place, with a number of nearby towns and villages, is reported as having been destroyed.

Great loss of life occurred at Avezzano and its vicinity, the number of dead there being placed at more than 15,000.

Among the towns in the earthquake district reported entirely destroyed are Bussi, Cappelle, Scurcola, Magliano, Cappadocia, Celano and Pescina. Sora and Arpino are said to have been partially wrecked.

Naples felt the shook severely but suffered only slight damage. Sulmona and Aquila, in the province of Abruzzi, and other town in that region report much damage and some loss of life.

No one was killed in Rome, but there is considerable material damage. Several of Rome’s historical structures were damaged.

THE TERRIBLE SCENES IN AVEZZANO AS DESCRIBED BY YOUNG ITALIAN DRIVER

Rome, Jan. 14, 2.50 A. M.—A young Italian driver who left Avezzano a few minutes before the earthquake gave a brief account of his experience when he reached Rome at an early hour this morning. His first intimation of trouble was when the horses of his carriage suddenly refused to go further. They stood trembling and at the same moment there came a deep rumbling like the roar of a railroad train going over a bridge. Three minutes later the standing walls of some quarries along the road had crumbled and were lying in dust covered heaps.

From Avezzano there came the cries of the frightened people. Amid the roar of falling houses could be heard the voices of women calling on the saints to help them. The city was under a cloud of dust. To the driver it looked as if the earth had opened to emit columns of white smoke.

This young man tried to drive back to Avezzano, but he could make no headway. He and his horses were blinded by the dust. Soon he saw survivors struggling to make their way from the city. Many had received injuries and were dragging themselves through the dust and confusion in pitiable plight. Some were so weak they fell by the roadside. The objective of the refugees was the railroad station, which was soon crowded with half frantic men, women and children. Before the driver left the vicinity, organized efforts were being made to convey tho most severely wounded to nearby hospitals.

Rome, Jan 14, 12.45 A. M.—From the most recent reports it appears that comparatively few escaped from the city of Avezzano. Those who got away and were only slightly wounded insisted upon returning to search the ruins of their homes for relatives and friends. Survivors dug frantically into heaps of plaster and stone, often stained with blood. The gruesome search was only too often successful. In many instances survivors fainted as their dead were brought to light in the ruins of the home. Then the heart-broken searcher had to be cared for by the members of the hastily organized relief committees.

At Scurcola a woman who unearthed the body of her 3 year-old child suddenly became insane. At Popoli a young husband returned from the fields where he had been at work, rushed to his home and found it a heap of ruins. He tore away the fallen masonry and entered what remained of his home, only to find his wife lying dead with the baby in her arms. At Sora an old grandfather, the sole survivor of his family, insisted in forcing his way through the shattered walls of what had been his home. Suddenly the walls collapsed and the old man was buried with the other members of his family.

Rome, Jan. 14, I A. M.—A railroad train which yesterday was reportod missing has been found near Avezzano. It ran off the track. There is nothing like satisfactory communication with the stricken district and consequently exact figures as to the losses in lives and property are impossible to obtain. Railroad traffic between Avezzano and Tagliacozzo still is intermixed.

The center of the disturbance appears now to have been the extinct volcano of Fucino in the province of Aquila.

The work of rescue and the search of the ruins in the hope of finding people still alive was continued all through the night. Bonfires were made and torches brought into use. The soldiers who early were ordered to the scene of the disaster did excellent Work.

Medical men are beginning to talk of the possibility of epidemics among those who escaped. A very large number of people fled front the stricken area and will have to spend some time without adequate shelter, They will suffer from exposure and lack of food.

NAPLES REPORTS BIG TIDAL WAVE IN THE GULF OF GAETA

Rome, Jan. 14, 8.40 A. M.—A dispatch received from Ancona says that a heavy storm raged yesterday along the Adriatic coast. There was also a heavy fall of snow.

Naples reports a strong tidal wave yesterday in the Gulf of Gaeta, accompanied by seismic disturbances on shore. Venice telegraphs of very cold weather in the Alps with the snow in deep drifts.

So far as prominent Italians in Harrisburg could learn today no Italians either from this city or Stedton or the relatives of those now in this section were in the province of Avezzano when it was leveled by an earthquake early yesterday.

Most of the Italians who reside in Harrisburg come from the city of Lucca, the former capital of the ancient Tuscan republic, in the northern part of Italy, which is a great distance away from the part visited by the earthquake.

[A]Gostino Branca, president of the local Italian Society, a branch of the Sons of Italy, said this afternoon that he had heard of no persons known about this section of the country being in the devastated territory.

“It is too soon,” he said, “to say whether we will raise money for the earthquake sufferers, but we will in case it is found necessary.”

The next meeting of the lodge wilI be on Sunday and some action may be taken at that time.

A severe earthquake occurred in Lucca last October and local Italians were much concerned about it at that time, but there was little loss of life and no Harrisburgers were made mourners, it was said today.